You Need “Zero” Marks to Clear the Cutoff For SBI PO

Amaze to hear this, but this is true. India’s largest bank State Bank of India (SBI) has selected the Probationary officers (PO) with “Zero” cutoff marks. Hindi daily (Dainik Bhaskar) has published this news in details where they claimed that the SBI had accepted this in one of the hearing related to PO exam at Delhi High court. Court has also ordered the bank to provide the details of marks of all the successful candidates on next hearing dated 16th April 2018.

A low performers if selected as officers in a bank, may impact the customer services and could be a reason for deteriorating businesses of public sector banks as well as their performance. The banking sector is now more depended on Digital platforms which requires officers with higher IQ level. The current selection with zero cutoff marks will really hamper the over all performance of bank in coming days if it’s true. If this is the case with SBI, what’s about the other Public Sector Banks recruitment process ?

Read : 10 Reasons Why Not To Join Bank as Probationary Officers (PO) ?

State Bank of India (SBI) had published the recruitment notification for selection of 2313 Probationary officers (PO’s) under advertisement number CRPD/PO/2016-17/2019 dated 06th Feb 2017. Prelims exam were conducted on various dates on 29-30th April and 06th -07th May 2017. Mains exam was conducted on 04th June 2017 and subsequently interviews were conducted from 04th To 16th September 2017. Final results along with score cards were published on 25th October 2017. 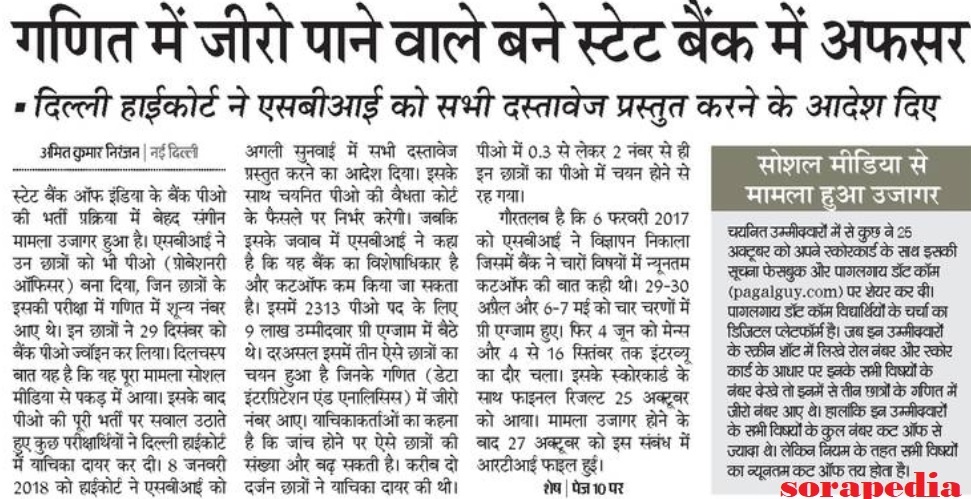 As per the supreme court order, any employers can’t change the procedure of exam including cutoff marks after publishing the advertisement. It is presumed by court in first stance that the SBI had violated the guidelines of supreme court after changing the minimum cutoff to Zero marks.

Earlier in the same case a RTI was filed by candidates to reveal the scores of all the successful candidates who has scored zero marks in any of the subjects, but SBI rejected the RTI request on the ground that it was third party request and bank was not bound to reply the RTI query.

Anyway the Zero was never be the cutoff marks in the history of Probationary exam ever.

Added to wishlistRemoved from wishlist 1